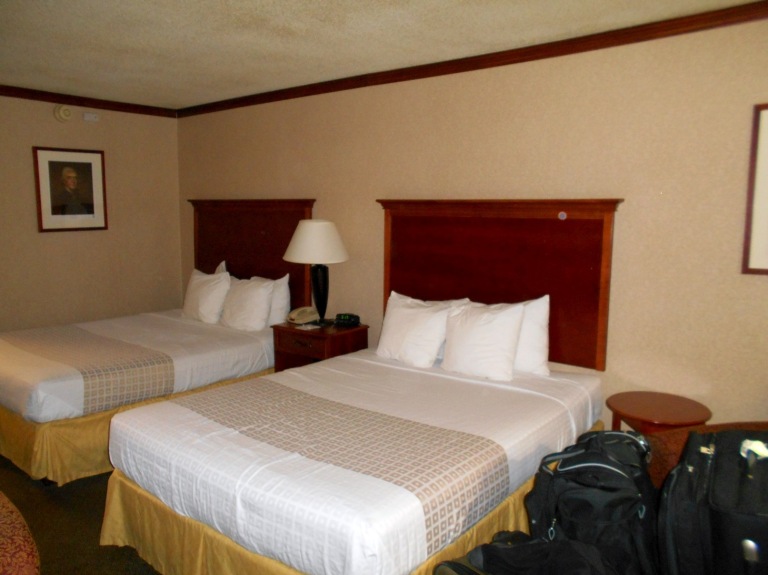 Everyone always warns you about not saying anything ‘wrong’ or trying to be funny when arriving into the USA, so I was a bit nervous standing in a massive queue to go through passport control at Dulles Airport (not that I’m funny anyway). I needn’t have feared though as it was all smooth sailing, despite us joining the slowest possible queue at every opportunity that presented itself! It took us quite a while to get through the whole process and it sorely tested my patience as patience is of course not one of my many virtues. We finally made it through and hopped on the shuttle taking us to pick up our rental car, where the staff seemed incredulous that their manager waived our second driver charge (about an additional $10/day).
We explained that we have email proof and that it may have something to do with the fact that we are indeed renting a vehicle from them for six months but the guy at the counter just couldn’t get his head round it. Eventually and after much tutting from him we picked out a Nissan Sentra from the available options; time will tell whether this was the right choice!
Luckily the airport had Wi-Fi so I could plot a route to our hotel and we got there a little after 17:00 (I think – things were getting a bit hazy at this point). Not having a route mapped out and printed was our first major mistake, shortly followed by the realisation that we didn’t buy travel adaptors at Heathrow Airport as I’d meant to and that all our devices were running dangerously low on juice! We checked into the Best Western Fairfax and to say that the state of the room was disappointing for $135/night is probably an understatement! Again, I have nothing to compare it to just yet and I’m sure we’ll have a lot more bad motels/hotels to come and I was too tired to be too bothered at this point anyway. The room was big enough, it had two Queen beds and Wi-Fi and that’s all that matters really. After dumping our stuff in the room we went out to hunt for something to eat and drink, and found a Fuddruckers just down the road from the hotel where we had a couple of burgers and beers. We experienced our first American thunderstorm and it absolutely hammered down while we were eating – it was still warm though! As it was still quite early we walked a bit further and came across a Hooters where we had another beer before calling it an early night – only to arrive back at the hotel to our beer swigging next door neighbour having a BBQ (cookout here I suppose?) right outside his (and our) bedroom door…interesting!
Things I learned from Day 1: You get really nice Americans and you get right *rseholes.
Some pictures of the hotel below as I didn’t take any others on Day 1 – trust me when I say it looks better in the pictures than it did in real life! Food pictures to follow in next posts! 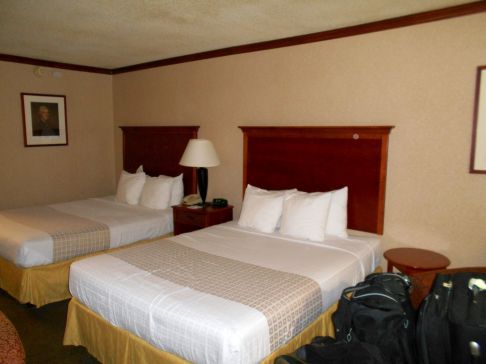 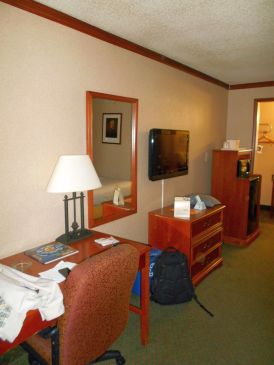