Quite a dull, uneventful day! We were up fairly early (as usual) but took it easy as Grünau isn’t that far from Upington – even though it is in a different country! The drive to the Ariamsvlei border crossing was easy enough, as was the border crossing, though it took a bit longer than planned. SARS requests all South Africans leaving the country to fill out a list of electronic goods with their serial numbers before leaving the country – very bizarre but it had to be done.

On the way to Grünau
On the way to our guesthouse near Grünau we stopped at the Karasburg Spar which is nothing like any Spar I’ve ever been in and made me realise we probably should have shopped in Upington. We managed to get a few bits of meat for the braai though, and set off for Vastrap Guest Farm where we were spending the night. Vastrap is an oasis with different options for accommodation and we went with self catering due to Brian’s culinary peculiarities. The farm will cook or braai for you and provide breakfast if requested and it is a lovely place to stay. Our chalet was well furnished with the cleanest braai and grill we’ve encountered anywhere on our trip. We spent a quiet afternoon reading and looking out over the flat, dry veld before braaiing our meat and relaxing outside.

On the way to Grünau 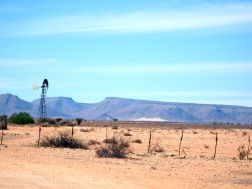